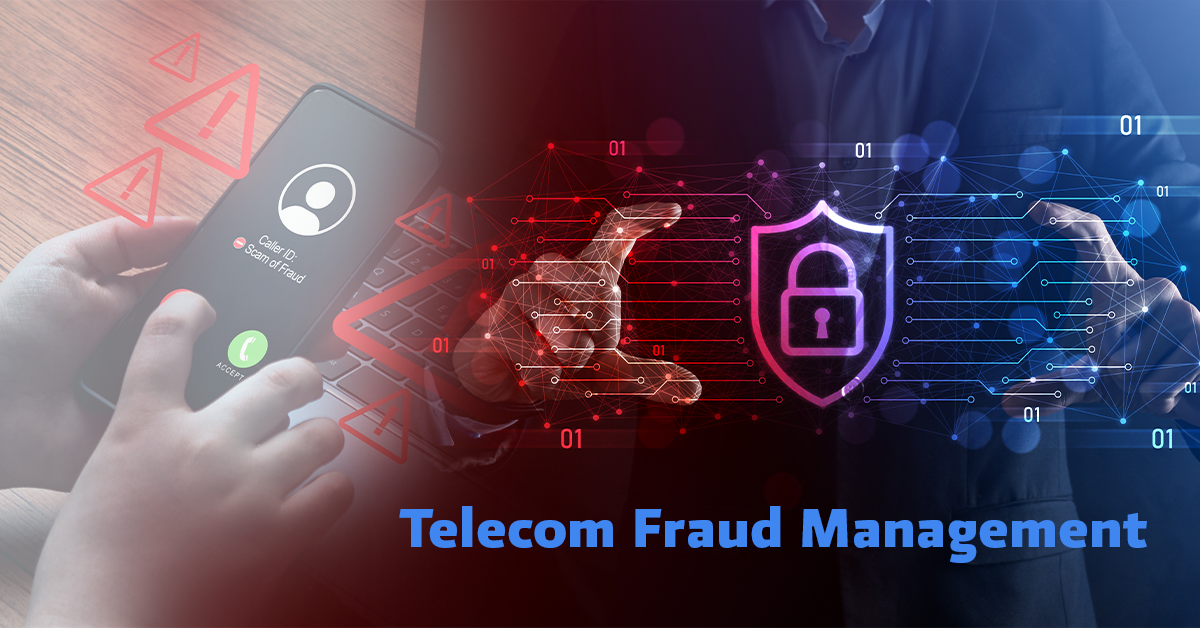 Telecom fraud is on a continuous rise and is one of the biggest sources of revenue loss amongst Telcos. As per a report from CFCA Fraud Loss Survey, Telecom Fraud Losses have increased by 28% between the year 2019 and 2021. The onset of pandemic in 2020, further escalated telecom frauds and security threats.

According to a survey released by Mobileum Inc. (“Mobileum”), it has been found that 75% of operators polled were experiencing new or emerging incidents of fraud and 61% said network security threats increased significantly with the onset of the COVID-19 pandemic.

The report even provides data about the types of fraud loss in which IRSF and Traffic pumping incur to $6.69 billion and $4.54 billion respectively in 2021.

With these numbers, it becomes evident that to manage the pervasive threat of telecom fraud, industry providers must have an effective fraud management approach which defends businesses and consumers.

What is Fraud Management in Telecom?

Frauds are not a new thing in the telecom industry – they have always been there. The technology is changing at a fast pace, so are the telecom fraud tactics. Fraudsters formulate new ways or simply tweak the existing methods to abuse telecommunications products and services. Their ultimate intention is to use services for free or illegally acquiring money from CSPs or end users. High frequency, multiple layers of anonymity and global nature help attackers to remain undetected.

An effective Telecom Fraud Management process is a critical element in determining the success of a telecommunication company. Such a mechanism is important to detect and prevent fraudulent activities which can cause revenue losses.  There are different types of telecommunication frauds that need to be addressed and handled by these mechanisms. Before we discuss this in detail, let us first take a look at the most common types of telecom frauds that one should know about.

Based on the target of the attackers, telecom frauds can be divided into two categories – Telcos and end users. Some of the major frauds that affect both carriers and end users are as mentioned below:

IRSF is one of the biggest fraud challenges for Telcos. In a report by CFCA, Revenue Share Fraud accounts for $4 billion to $6.1 billion loss to the telecom industry. In this type of fraud attempt, the attackers take advantage of premium phone rates. Here’s how it happens:

These calls are generally made outside a business’s working hours. Most of the time, companies do not realize that they have been attacked unless the time to pay the phone bill arrives.

Call Forward fraud is a sophisticated form of telecommunication fraud. Attackers first hack the access to the PBX system or IVR (Interactive Voice Response) of an enterprise. Then they configure call forwarding to a premium long distance number. Once done, the attacker calls the phone number of the hacked PBX system which forwards the call to the premium number. Here the attacker earns profit from IRSF.

It is also known as ‘One Ring and Cut’ Fraud. Wangiri is a Japanese word which means one and cut. It’s a telephone scam that aims at striking curiosity among customers by calling from premium rate numbers. Each call is made to ring only once and is hung up. Thus, leaving a missed call on the recipient’s phone. The recipient often calls back without knowing that it’s a premium rate number controlled by fraudsters.

Also known as Toll Bypass Fraud or GSM Gateway Fraud, these types of frauds are executed by routing unauthorized traffic to a local operator via Sim Box or GSM Gateway. This is done so that the call terminates with the local operators and thus the expensive international interconnect gets replaced with an extremely low cost routing channel. The bad actors thus earn the cost difference.

In this type of frauds, the fraudsters make money by selling wholesale trunking services. The fraudsters use stolen credentials to terminate calls. Usually huge number of random calls are generated by fraudster where destinations are not high cost but are not low cost either. This is how it is executed:

Wholesale SIP trunking fraud is often difficult to detect. This is because the call patterns in these frauds look similar to normal subscriber usage.

This type of fraud is executed by obtaining stolen identities (KYC documents) of customers from phishing attacks or purchasing from the dark web. Customer information is used to sign up for new telecom contracts and using their products and service, but without the intention of paying them. It has been estimated that almost 40% of bad debts are actually subscription frauds.

How to Identify Fraud in Telecom?

Traditional Approaches to identify fraud in telecom are based on blacklisting of fraud phone numbers. But today attackers can simply bypass such detection by changing their phone numbers using VoIP.  Some of the most common techniques to detect telecom frauds are:

How to Prevent Telecommunication Fraud?

We all know that prevention is better than cure. The same saying applies to telecom fraud management scenario. Though attackers would always formulate new ways to penetrate into the systems, but one should follow a proactive approach to fight telecom frauds. There are some golden countermeasures MNOs and MVNOs should always follow to prevent telecom fraud from happening. You can also read our post on SIP/VoIP Fraud Attacks

Always make sure that your software systems are protected with strong passwords, preferably a combination of alphanumeric characters. Also, it is important to change passwords periodically.

The most appropriate time for attackers to execute their attacks are after business hours, weekends and holidays. Thus during these times, it becomes more important to monitor PBX systems for any unusual activities.

Often we tend to keep old files in our systems which are of no use. But it is crucial to clear out all the junk files and folders from the system and deactivate unused features such as extensions.

For a business it is critical to cross-check and validate the details of its subscribers so as to filter out the fake ones. Also, applying 2 factor or multi-factor authentication is also an additional step towards ensuring security.

Keep an Eye on Expenditures

By doing a smart analysis of how much expenditure typically happens in a month, a business can keep a watch on any fraudulent activity. Many companies don’t do this, but tracking your expenses can help deter telecom scammers.

Security software play a crucial role in covering all grounds when it comes to security. Using intelligent security software like REVE Session Border Controller is a wise idea to keep telecom attacks at bay. REVE SBC is a Carrier-grade Cloud SBC that safeguards software switches from various types of attacks including DoS i.e. Denial of Service Attacks. It also includes intelligent firewall and state-of-the-art encryption techniques to protect a business from theft of service. Learn more about session border controller vendors.

Wish to learn more about prevention of telecom frauds? Just get in touch with our team to get the best security solutions.

An Overview of Session Border Controller

How to Prevent Spoofed Robocalls with STIR/SHAKEN